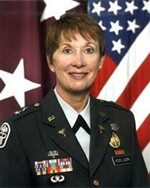 General Pollock became acting Surgeon General of the United States Army for nine months. She is the first woman and the first non-physician to hold the position. She has 30 years of service in the Army and is a Certified Registered Nurse Anesthetist. She retired from the Army in 2008.